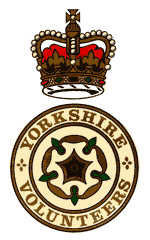 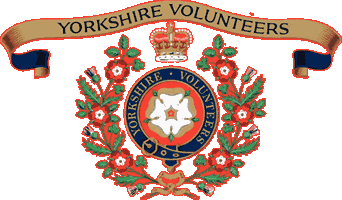 Yorkshire Volunteers was a Territorial Army Infantry Regiment of the Line, forming part of The Kings Division.

The Yorkshire Volunteers Regimental Association offers membership to all who have served with the Yorkshire Volunteers or with the Territorial Army Units it succeeded. The activities of the Association Branches are organised by a committee under an elected Chairman appointment by an Annual General Meeting (AGM) and confirmed at subsequent AGMs if no change. Ordinary Membership has been extended to include those who served in The Regiment's successor units.

Members are those individuals who have applied for and been granted membership of a Branch of the Association, upon payment of the annual subscription in force at the time. See also "Honorary Members" below.

That group of Members charged with managing the business and affairs of the Association.

Those groups of Members, approved by The Committee, which, together, make up the Association.

Where no ambiguity or misunderstanding is likely, this may be abbreviated to the Regimental Association or the Association.

The aims of the Association are to promote Regimental traditions and support succeeding T.A. Units in Yorkshire. The Association will safeguard the name of the Regiment and the interest and welfare of those who have served in or with it, or other Members.

(a) Categories of Membership and eligibility

(i) Ordinary membership is open to any person who served in or with any of the battalions of the Regiment or the Band of the Yorkshire Volunteers, any of the TA units The Regiment succeeded, or any of the units which subsequently succeeded The Regiment.

(ii) Associate membership is open to spouses of full members, or those who have served in HM Armed Forces, or similar, who wish to support the aims of the Association. Associate Members must be proposed and seconded by ordinary members, their application considered at a Committee meeting of the Branch concerned and properly minuted. Associate members will pay the normal Branch subscription, but will not be entitled to vote at the Association's AGM. They may, however, vote at the Branch AGM if that is approved by the Branch. Details of those granted Associate membership should be forwarded to The Committee who may also, in exceptional circumstances, approve the grant of Associate Membership to persons not included in the above categories. After a period of exceptional service to the Association, certain Associate Members may be considered by their Branch and the Committee to be allowed to become Ordinary Members.

(iv) Membership cards, of a standard form approved by the Committee only, will be issued to all categories of membership. These, and any other form of identity issued, will be relinquished without delay to a Branch Officer on the termination of the membership of an individual and will then be returned to the Secretary of the Committee.

(v) Visitors and guests may be allowed to attend Association and Branch functions, providing that the Secretary concerned receives appropriate details in advance and the member introducing the visitor or guest is responsible for their conduct and for ensuring that they conform to the rules and aims of the Association.

(b) Code of conduct

(i) All members of the Association will be mindful of the need to consider the rights and feelings of others; in particular, at Association and Branch functions and meetings and when in the public eye

(ii) Dress and behaviour at Association and Branch meetings will be in accordance with this Constitution and the approval of the Chairman of the meeting.

(iii) In the context of the democratic process by which the Association is managed, all members are equal, regardless of former or present rank. However, appropriate courtesies, in the form of address, will normally be used when speaking to or referring to members significantly senior in rank.

(c) The Secretary of the Committee will maintain a register of members which may not be used by any third party or for any purpose other than Association business.

(a) The Association will be made up of a number of "local" Branches and a "Central" Branch. Central Branch is for those who wish to be Members but cannot, or do not wish to, become involved in local Branch activities.

(c) Branches will require their Members, of whatever category, to uphold the aims of the Association and to comply with the Constitution.

(d) A new Branch may only be formed with the approval of the Committee, following upon representations from at least five ordinary members wishing to form such new Branch. In normal circumstances, eight will be minimum number of members required for a Branch to continue.

6.Committees, their officers and members

(a) The Committee, all Branch Committees, their officers and members, will act in accordance with the Constitution and in the best interests of the Association.

(b) Central Committee (The Committee),
(i) Officers of The Committee.
These should include the following, plus any others as may be required from time to time:
President
Vice President
Chairman
Secretary
Treasurer
Public Relations Officer

Each of the above will normally be an Ordinary Member and should serve a term of three years, but may offer him/her self for re-election by the other Committee members. Where possible, not more than one of Chairman, Secretary or Treasurer should retire in any one year appointment of their successors to be confirmed at the following AGM.

The President and Vice President will not, normally, retire in the same year.

(ii) The committee will meet not less than four times per year, excluding the AGM; notice of meetings will not be less than three weeks. Two members, not being officers of the Committee, plus two officers, must be present to constitute a quorum

(iii) Any branch member may, by invitation of the Chairman or the majority of the Committee attend as an observer, and may participate in discussions but may not vote. In exceptional circumstances, the Chairman may invite other observers to attend.

(c) Branch Committees
Will include a Chairman, Secretary and Treasurer and such other officers and members as the Branch members may decide. Subject to approval by the Committee, these positions may be filled by Associate Members.

(d) Any officer of the Association, member of the Committee or elected officer of a Branch who shall fail to attend any three consecutive Committee meetings (which have been called in accordance with standard practice) shall be deemed to have requested to resign his/her position. The Committee may make exception to this when written apologies for absence have been received, preferably beforehand.

7.General meetings of the Regimental Association

(a) The AGM will normally take place in April. Notice of the date and location, determined by the Committee, will be given to Branches not less than sixteen weeks prior to the event.

(b) The agenda will be prepared by the Secretary, who will keep a record of the minutes.

(d) The quorum for the AGM shall be as for a meeting of The Committee, plus six members.

(e) A Special General Meeting may be called at not less than four weeks notice for the consideration of a single resolution or the appointment (until the next AGM) of Officers of the Committee. No other business may be considered.

The following will apply to meetings of the Committee.

With the exception of Clause 8(c), Branch Committees will determine their own conduct.

(b) Drinks. A single drink may be taken into the Committee meeting but, except in exceptional weather circumstances (and then at the discretion of the Chairman) no further drinks will be permitted before the meeting is closed.

(c) Meetings will be conducted in a business-like manner with accurate minutes including times of opening and closing of meetings.

The accounts of The Association (and de facto those of The Committee) will be submitted for approval at the Annual General Meeting of The Association. Each branch will submit its accounts for audit not less than once every two years to the Treasurer of YVRA or such person nominated by the Committee or the branch may arrange for an audit to be conducted by an independent auditor who is suitably qualified or is a serving or retired Officer of the rank of Major or above and who will provide a certificate of audit to the Committee. Any costs incurred by using an independent auditor will be borne by the Branch.

(a) In the event that the AGM shall be inquorate, or that a majority of those members entitled to attend shall so vote, the Association may be wound up and any residual funds will pass to the Army Benevolent Fund.

(b) In the event that a Branch shall be closed, any funds held will be transferred to the central account of the Association. This shall not apply if two or more Branches choose to amalgamate, in which case their separate funds will be amalgamated to the combined benefit.

(c) Should such an amalgamation be ended and the Branches resume their independence within 365 days, the joint fund will be divided in the same proportion as those elements initially combined.